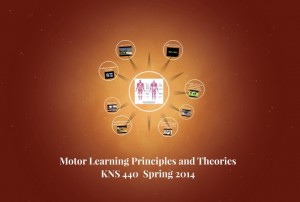 Liaison?” I started to consider the question myself. It was while I was facilitating the digital
storytelling projects in Dr. Barlow’s Motor Learning & Control class that the answer became apparent. I was charged with overseeing the digital storytelling projects in the class (final product depicted on the right), but it worked most conveniently because I was also in the class. In the beginning I didn’t know many students in the class, but over the course of the semester I got to know the majority of the class pretty well. Because of this, throughout the semester when I would give small announcements or reminders about the digital stories, the class would continually ask more questions.

I think that this in particular evidences the usefulness of student technology liaisons. For one, it was extremely convenient for the students to have me at their disposal on a daily basis. I believe that this was an advantage, because if the digital stories were solely facilitated through Media Services staff it stands to reason that the students would be less likely to ask questions for several reasons. For one, the distance between the classroom (in this case the Athletic Center) and the library, but I believe that it is also somehow reassuring to students to have a peer they can defer questions to. In this case it seemed like students were less intimidated when asking questions of a peer than perhaps they would have been when asking questions of an authority figure.

So rather than the idealistic concept of spreading digital knowledge and to bring about the rise of a more efficient digitized format of learning, if I had to answer the question “why be a technology liaison?” from a purely pragmatic standpoint, I would say that from my experiences, students seem to find their peers a more approachable resource, and are more likely to feel comfortable asking such a resource for help.