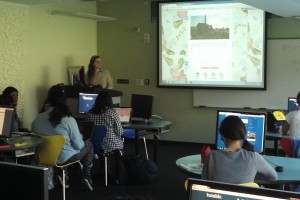 My name is Erica Clifford and I attend Whittier College.  I am a senior English Literature major with Spanish and Film Studies minors.  I have had the opportunity to work with the DigLibArts project this semester as one of the first student technology liaisons at Whittier College.  As a technology liaison I am helping to facilitate a technological transformation within many of the classrooms in various departments.  Although I have been dabbling in researching a wide variety of other technology, my two main areas of focus are integrating Tumblr into different courses, as well as overseeing the use of digital storytelling in the Kinesiology department.

I have used Tumblr previously both recreationally, and in Andrea Rehn’s Jane Austen in Context course.  In Jane Austen in Context the Tumblr blogs were used as 21st century commonplace books to record, analyze and otherwise reflect upon quotations, and to incorporate other various forms of media relating to Austen and her novels.  In this course in particular the aim was to integrate ourselves into the wider Austen culture (also known as Janiacs) and to become a part of that community by sharing media and ideas. (Here is a link to my Tumblr blog for Jane Austen in Context)

The Psychology and Education pair that I have been working with has quite a different aim.  This course aims to promote dialogue between a variety of student from different age groups at different schools.  Because of the young age of some of these students, we have attempted to exercise every precaution to ensure that their experience with Tumblr will be a safe and secure one.  It has been challenging to attempt to essentially close off and secure a public microblogging website that is intended for social networking.  The use of Tumblr for this specific purpose, to create a closed-community dialog between several different campuses is still very much in the trial and error phases.

As for the digital storytelling projects in the Kinesiology department, I am facilitating the use of this technology within Dr. Kathy Barlow’s Motor Learning & Control course to explain a variety of motor learning theories.  When the eight different projects are done, they will be compiled into a Prezi that will showcase all of the major theories covered in the course throughout the year.  While using Tumblr in the Psychology and Education pair sometimes feels like we are attempting to stretch the website to a purpose that it was not initially intended to serve, it is quite the opposite in Motor Learning & Control.  I have previously made digital stories in English Literature courses, and enjoyed the process, but it has been challenging to find the correct examples and visual aids to match the subject.  In Motor Learning & Control, however, the various theories are intended to apply to specific concrete examples of movement and coordination.  In this way it seems as though the digital were meant for, or especially well suited to this purpose.